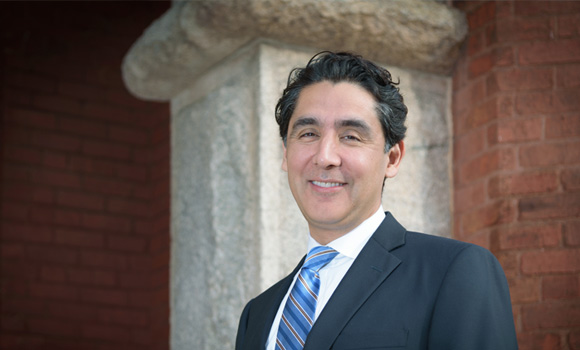 Dr. Omar H. Ali, interim dean of The University of North Carolina at Greensboro’s Lloyd International Honors College, has been named North Carolina Professor of the Year by The Carnegie Foundation for the Advancement of Teaching and the Council for Advancement and Support of Education. UNCG Provost Dr. Dana Dunn nominated Ali for the award.

“One thing that distinguishes Dr. Ali’s impact from that of other excellent professors is his commitment to student development in and beyond the classroom,” Dr. Dunn said in the nomination. “Dr. Ali continually searches for methods to inspire student interest and learning . . . I cannot think of a more talented individual to nominate for this prestigious award.”

Dr. Ali is a professor, historian and community organizer in North Carolina. He is Associate Professor of Comparative African Diaspora History in the African American & African Diaspora Studies Program with faculty affiliations in the History Department and the International and Global Studies program. In 2014, he received the Senior Faculty Teaching Excellence Award in the College of Arts & Sciences at UNCG.

“I wish we had more Omar Ali’s on this campus,” said UNCG Chancellor Franklin D. Gilliam, Jr. “His presence in the classroom drives students to reach higher, dig deeper, question conventional thinking, and to never settle. Omar is an extraordinary asset to UNCG who not only inspires students but also inspires all of us. He is truly deserving of this distinction.”

Ali studied political economy and cultural anthropology at the University of Michigan and the School of Oriental and African Studies before graduating from the London School of Economics and Political Science and receiving his Ph.D. in History from Columbia University. Ali has been a Fulbright professor of history and anthropology at Universidad Nacional de Colombia, Bogotá, a visiting professor of African American & Diaspora Studies at Vanderbilt University, and a Library Scholar at the David Rockefeller Center for Latin American Studies at Harvard University. With colleagues at UNCG he founded the Islamic Studies Research Network, an educational research network to promote awareness and understanding of Islamic history and culture.

“Teaching, like learning, is a revolutionary activity–that is, it’s about changing environments and creating new possibilities,” said Ali, in accepting the award at the Ronald Reagan Building and International Trade Center in Washington D.C. “At its heart, it’s a kind of creative performance in which we relate to each other as constantly growing. How do we help create such environments for learning, for growth? By affirming and building on what others say or do. It’s doing ‘yes, and …’ warmly, enthusiastically and in the most giving way possible.”

On May 7, 2015 Ali gave a TEDx talk entitled, “What’s in a Name? Islam, History and Identity.” He has appeared on CNN, C-SPAN, NPR, PBS, Black Network Television and Huffpost Live, including other news networks. The author of four books, most recently Malik Ambar: Power and Slavery Across the Indian Ocean, published by Oxford University Press, he has lectured widely across the U. S., as well as in Latin America, East Africa, and South Asia.

Ali serves on the board of directors of several community-based organizations, including the national All Stars Project, which transforms the lives of young people in poor and working-class communities by using the power of performance–the improvisational methodology that Ali practices to help cultivate creative learning environments.

Sponsored by the Carnegie Foundation and administered by the Council of Advancement and support of Education, the professor of the year award recognizes professors for their excellence and commitment to undergraduate teaching and mentoring.