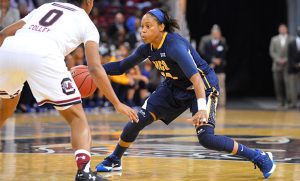 Senior Lucy Mason is best known at UNCG for her stellar performance on the basketball court, but she’s also an all-star in the classroom.

The 5-foot-7-inch guard from Stone Mountain, Georgia is third in the nation and leads the Southern Conference in scoring (24.5 points per game). On Dec. 28, Mason broke Anglie Polk-Jones’ 26-year old scoring record. The month before, she broke a 35-year-old UNCG record for individual points scored in a game with 42 against High Point University.

Last summer, Mason had the opportunity to dig deeper into her interest in history by researching and writing about many of UNCG’s outstanding African American faculty, staff and students for University Archives. One of the posts she wrote features Angie Polk Jones, former basketball player and current principal at the Middle College at UNCG – the very woman whose scoring record Mason hopes to break later this season.

“There were a lot of interesting stories,” Mason said. “It makes you want to go out and do great things.”

And Mason is doing great things. She says it’s the competition that drives her to excel in everything she does.

“I come from a family of athletes. There’s always competition in everything,” she said.

Mason began playing basketball competitively when she was only 6 years old. In high school, she played basketball on a club team and at school. She was also an all-region softball player and finished top-10 in the state for 100-meter hurdles.

When she began looking at colleges, Mason had basketball scholarship offers from a number of different schools across the Southeast, including UNCG. Meeting with UNCG’s women’s basketball team and coaching staff “really helped solidify” her decision, she said, but the deciding factor was UNCG’s stellar academics.

“I knew I wanted to major in something to do with African American studies,” she said. “None of the other schools had that major.”

Constant growth and excellence takes hard work, and Mason’s hard work – both on and off the court – has been recognized.

“I still want to be around sports,” she said. “I want to be hands-on.”