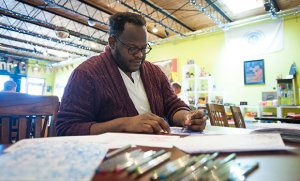 Whether he was sketching on notebook paper or piecing together large-scale collages, Maurice Moore was always fascinated with the idea of exploring his own identity through his artwork.

Now, however, he’s not just telling his own story – he’s using art to tell the narratives of others.

Moore, who graduated on May 6, returned to UNCG’s campus in 2015 to pursue his third degree: a bachelor of arts in African American and African Diaspora Studies (AADS).

Thanks to the interdisciplinary nature of AADS, Moore has learned about the histories of a wide range of people, focusing specifically on individuals of color and women. He’s taken what he’s learned in the classroom and has started to incorporate it into his work.

“I’ve learned a lot about myself through learning other people’s perspectives. It’s helped make my art better,” he said.

Moore considers himself an activist, and hopes to use the narratives of “otherness” in his art to give a voice to everyone.

“I don’t think being an activist is just about going to rallies. It starts with respecting people’s identities, and I try to convey that through my work,” Moore said. “Now when I create art, I ask myself: Is this work being used to fight oppressive norms? Or am I further contributing to oppressive norms against myself as well as others?”

While he was finishing his degree this spring, Moore was also teaching four sections of art appreciation at Guilford Technical Community College. Moore has been teaching since 2011, when he graduated from UNCG for the first time.

He also spent his last semester serving as an intern at the International Civil Rights Center and Museum in downtown Greensboro, where he learned the ins and outs of how to run a museum.

What’s his next step? Another degree. Starting in the fall, Moore will pursue a master’s degree in Afro-American Studies from the University of Wisconsin-Madison. His goal is to eventually pursue a PhD.

“It’s a great opportunity for me to go somewhere new and meet new people,” he said. “I’ll always be an artist, but I want to do other things as well. I’ve learned I can express myself in a variety of ways.”