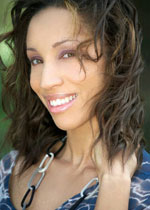 UNCG alumna Tenae Wilkins Downing ’02 made her feature film debut in “War Room,” which surprised many as it topped box offices across the nation over Labor Day weekend.

“I still don’t think it has clicked how well this movie is doing,” Downing said, but added that she’s not surprised because she feels the movie has a meaningful message.

“There is a thirst for that in this nation,” she said.

The faith-based film follows the story of how prayer changes a couple’s struggling marriage, and Downing plays the supporting role of the temptress Veronica Drake.

“I call myself the conflict. My character is one of the tests the marriage had to have,” she said.

As a mother, wife and preacher’s daughter, Downing said she’s cautious about the roles she’ll take. Accepting a role in a faith-based film felt “safer.”

“You want the quality stuff,” she said. “I wanted to do something my kids could see.”

Downing said she heard about the film last spring, when a cast member from a play she was in told her about it. She created a demo reel and sent it to the casting director. She attended an audition, and was awarded the role.

When Downing attended UNCG, acting wasn’t on her radar. She ran 100 and 200 meter sprint events on the track and field team, and she had her sight set on the Olympics. After an injury, however, Downing had to move on to other dreams.

Downing says she “became a family girl” when she married her husband, Earl Downing, and had their three children – Briana, 10; Daniel, 8, and Naima, 5. She is expecting their fourth child, Alexander, in December.

After brief stints in California and Virginia, the family now resides in her hometown of Charlotte. When she isn’t acting, Downing is a stay-at-home mom.

“Acting was sort of a surprise,” she said.

Downing had always been interested in acting, but never had time to pursue it because she was busy running. When her mother died, however, she began taking acting classes to cope with her loss.

She landed several roles in small projects, including a music video and a short film featured at the Cannes Film Festival, before she was cast in “War Room.”

As a student at UNCG, Downing majored in media studies and African American studies, both of which prepared her for her debut on the silver screen.

Her original career plan was to be a sportscaster after her career in running came to an end.

“I didn’t just want to be an athlete with a mic,” she said.

So, she decided to learn the other skills she needed along the way, such as video editing, lighting and camera angles.

“I was able to take all those skills with me into acting,” Downing said.

As she took African American studies courses, Downing thoroughly enjoyed reading and writing stories and poems, and she began to realize she had a creative side.

Perhaps the most important thing Downing took away from her time at UNCG was a sense of confidence and pride in herself.

Professors such as Dr. Frank Woods of the African American studies department and Frank Donaldson of the media studies department were the “reason why I found my own voice,” she said. “They believed in me, and that helped me to believe in myself.”

“I finally learned who Tenae was from attending UNCG,” she added.